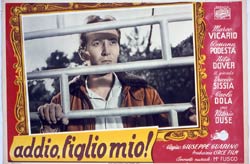 During World War II, Giorgio, a pilot officer, receives sudden orders to join his squadron which is leaving for Africa. His fiancée, Elsa, accompanies him to Livorno, but a sudden breakdown of the railway line forces her to pass the night in the city, in the same hotel where Giorgio is staying. It will be their first and only night of passion. After some time, Elsa's mother dies, and thus Elsa, who's expecting a baby, is left alone. To avoid people's gossip, Elsa moves to Rome to go live with a friend, Anna, who sings and dances in a night club. After the birth of her child, Elsa goes to work there as well. News from Africa indicate that Giorgio is considered missing. At the club, Elsa meets an engineer who hires her as his secretary and eventually marries her. Four years later Elsa leads a peaceful life with her husband who loves her and her child. But suddenly Giorgio returns to Italy after many hardships. He briefly meets Elsa at Anna's place, but he has made up his mind not to trouble the life of his beloved and therefore finds the strength to leave. On the verge of despair, he joins a gang of criminals with whom one night he enters the house of Elsa's husband. The bandits kidnap his child, and in order to save the boy's life he offers his own and dies happily