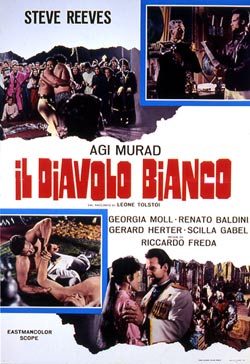 Agi Murad head of the Caucasian rebels and called the "White Devil", is giving serious problems to the Czar, winning battle after battle and gaining ever more popularity among the people. Agi is betrayed by a member of his tribe; the kidnapping of his woman and son will be used to force him to sign an agreement with the Czar... But they had underestimated the "White Devil": his revenge was going to be terrible!!