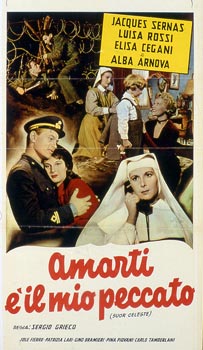 Monti, estate manager of Countess Danieli, commits suicide after embezzling his employer's money. His daughter, Elena, goes for help to Sergio, son of the Countess. Despite his mother's disapproval, Sergio hires Elena as a secretary who soon becomes his mistress. With the outbreak of World War II, Sergio is drafted into the air force - his plane is lost at sea and he is believed dead. In the meantime, a child is born to Elena, but the Countess does not recognize him as her grandchild. When news cames of Sergio's being alive, the Countess grabs the child and throws its mother out. Elena attempts suicide - she survives and becomes a nun. Sergio meets her working as a nurse in a hospital - he tries to make her come back to the world, in vain. But when he goes back to the hospital as a patient after a road accident, she nurses him and ends up leaving the hospital with him