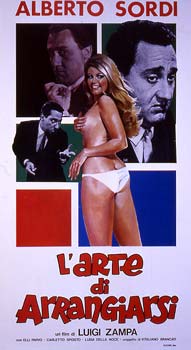 Sasa has learned from his childhood the art of obtaining what he wants, even with immoral and dishonest ways...This habit of his will help him profit from several situations, passing from a political party to its opposite, selling secret information, getting married for money, pretending a religious vocation and having several lovers.. Getting what he deserves, he ends up in prison, but as soon as he is released, disguised as a German... Certain vices are never lost!!