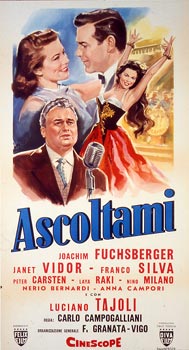 Luciano, a famous singer, has left his wife for another woman. A serious accident, however, makes an invalid of him and curtails his brilliant career. Left by his mistress, he returns to Italy. With his friend Oreste, he goes to a little night-club where he hears a young man with a beautiful voice singing. The voice belongs to Franco who is a lorry-loader by day and sings by night to pay for his fiancèe, Giulia. Giulia is unaware of the fact that Franco is singing at the night-club for her benefit and, when she finds out, suspects him of being mixed-up in some shady business. They quarrel and she leaves him. Luciano has found out that his wife is dead and that Franco is his son. Without revealing the truth, Luciano gives his son singing lessons to encourage his career. However, the place where he sings is a smuggler's den; the smugglers try do draw Franco into their ring, but he refuses. Finally, he recognizes his father, finds Giulia again and, after a series of mishaps, gets married to her.