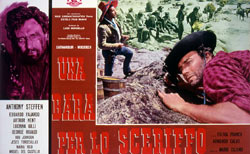 A mysterious man named Joe arrives in Richmond to join Lupe Rojo's band of criminals. Joe, an ex sheriff, is hiding his true identity to look for the man who raped and killed his wife and who is suspected to be a member of the band. Unfortunately, a misadventure leads to the give-away of his intentions... His ability, but most of all the determination to find revenge for his beloved wife, gives him the strength to eliminate the band and kill the rapist...