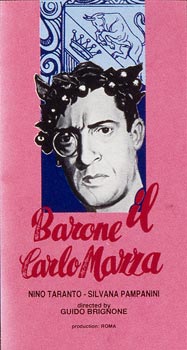 The baron Carlo Mazza lives poorly in a little room in the attic of the palace once owned by his ancestors. When the new landlord throws him out, the baron tries to commit suicide with gas, but fails because of a gas-strike on that very day. A friend suggests he should marry the daughter of an industrialist. But the girl marries only to make sure of inheriting a fortune from an extravagant and very rich old uncle. Once her uncle is dead, the marriage can be annulled. The ceremony is conducted in a very strange pagan way to comply with the crazy uncle's wishes. But even stranger is the baron's married life, his wife's promiscuous conduct is the cause of his ridicule. Through a series of comical scenes and vulgar jokes, puns and obscene songs we come to the end of the film, where the baron gives up the idea of becoming a millionaire and leaves his wife.