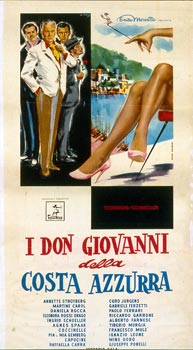 Three young Sicilians, bored with their provincial life, plan a trip to the Cote d'Azur. The first, Melchiorre, has the misfortune to fall in love with an artist who is really a transvestite, well-known the world over; the other two, who at the beginning appear to be more fortunate, are also disillusioned by their unhappy adventure with two Swedish twins and with a foreign girl. But there are also another three Don Giovanni's: Edmond and his nephew, Michel, who flirts with success a millionaire, and the third a lawyer, Mr Le Blanc, a mature man who is suffering from the fascination of a young girl he became acquainted with on the beach. In the end, the three Sicilians return to their rightful country, disillusioned after their unhappy adventure: of having told and having believed lots of lovely tales