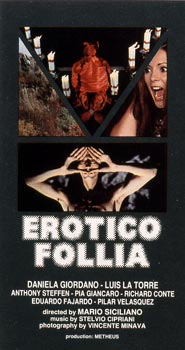 Peter Crane, a well-known roman playboy, is under the influence of extraterrestrial forces which make him act abnormally and carry out certain actions which he only remembers afterwards as nightmares: his casual affair with Ivonne Cheurel who is guilty of murdering her own husband and whom Peter subsequently kills; the murder of William and Elizabeth Stevens who offer him a bed on the night of his first killing and who are themselves guilty of the assassination of an old colleague; his affair with his doctor's assistant and finally the murder of his friend, Robert, himself guilty of killing his own father. When finally a police lieutenant from the department of criminal investigation nails all these crimes on Peter, it is too late to do anything about it, as Peter and his girlfriend have already been whisked away by the extra-terrestrials who have been using Peter to carry out their own vendettas.