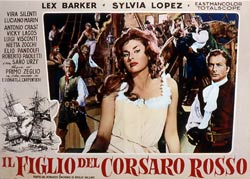 Count Enrico, the son of the popular red pirate, is determined to find bandit Van Hais, responsible for his father's death. The search will rapidly pull him into ever more complicated and dangerous adventures... cruel soldiers, insidious waters and seducing women! The task is almost hopeless when his sister Neala, who had disappeared several years before, is indeed involved in the plot... But Count Enrico is always ready to fight for a woman's honor!