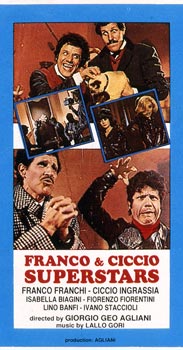 Franco Franchetti is a teacher in an evening school for pick-pocketers. He needs an alibi for a robbery he is planning, so he goes to the secondary school to make contact with professor Ciccio Ingrassini. He uses his young sister-in-law, Bruna, to get to know the professor and before long the two men become firm friends and start organising other robberies together. As a result, they live through many adventures: they manage to swindle thousands from a bishop representing the Fascist Government, but have to hand over the loot to a group of guerrilla fighters; they come by a cat called Archibald, who one way and another secures them a few hundred pounds each month, but they treat him badly, so he disappears; they go off in search of Archibald but end up in further trouble thanks to an international terrorist, known as "Gatto", who is being hunted by the police in several countries. However, despite all their mishaps they accomplish a partly successful robbery at the Bank of Italy.