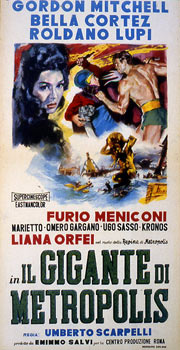 It is the year 20.000 BC: Obro, a brave explorer decides to reach the kingdom of Metropolis. His companions die attacked by the guards and Obro is taken to King Yotar, a mad scientist... Several victims are regularly sacrificed to his experiments of brain transplant. Obro, on the victims' side, takes advantage of the announced earthquake to eliminate Yotar and free the people from his cruel and inhuman dictatorship.