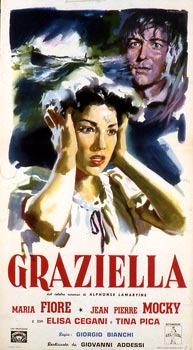 In 1821 in Naples, Alphonse de Lamertine goes fishing with two old fishermen. They are taken by surprise by a storm, but manage to reach the island of Procida, where Alphonse stays with Andrew, the owner of the boat, who lives on the island with his wife and his granddaughter, Graziella. Alphonse stays for a while and gets to know the simple and romantic Graziella. Soon romance blossoms between the two. Summoned by his uncle, Alphonse leaves for Naples, promising to return but, in the meantime, Graziella is forced into a betrothal with her cousin, Cecco. Soon after, Alphonse hears that Graziella is soon to be wed, so he returns to Procida where he learns that she has disappeared. Luckily, Alphonse knows where to find her. The two are about to marry, but Alphonse is called back to Paris. During his absence, Graziella passes away. Summoned by a desperate letter, he returns to the island once more just in time to give her one last kiss.