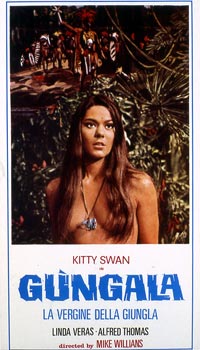 Two white men steal one of the eyes of a jungle tribe's idol. It's a huge diamond. Shortly after, the younger of the men shoots the other and takes off with the diamond. Years later, Wolf, the wounded would-be thief, learns from a tribal chief that the stolen diamond is owned by a wild white woman called Gungala. Wolf sets off with a small expedition to get the diamond. After a long journey and many adventures Wolf spots the girl wearing the diamond around her neck. Just as he snatches it from her, he's attacked by a black panther. Gungala takes her diamond and disappears into the jungle. Before dying, Wolf reveals that she is the daughter of the man who had shot him years earlier.