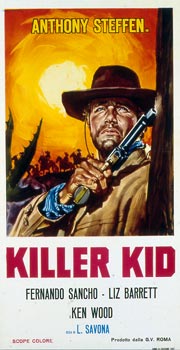 Morrison is ordered by the U.S. government to track down and stop the arms dealers that illegally sell arms to the Mexican rebels. Morrison assumes the identity of Killer Kid. While on the trail of some arms traffickers, Kid-Morrison is wounded and captured by a Mexican government squad, but is freed by Pablo, a young guerilla. Kid and Pablo go to the guerilla camp refuge where Kid meets the leaders of the guerilla group and Mercedes, a lovely girl devoted to the revolution. Kid gets to understand the ideals that guide the rebels and the cruelty and corruption of the government's men. He decides to join them after Mercedes sacrifices her life in a heroic act.