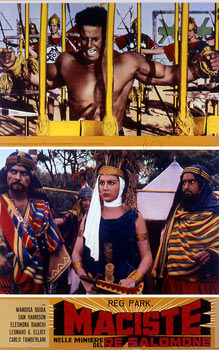 The exploitation of King Salomon's rich mines is prohibited by King Namar's decision to turn them into a sacred temple.... But his corrupt Prime Minister and a band of robbers, after having killed Namar, force his subjects to dig the precious minerals. Maciste, however, after having freed Prince Visma - the only heir - plans a successful revolution: saved from slavery, the population can return to their houses... The greedy outlaws are kicked out of the reign once and for all!