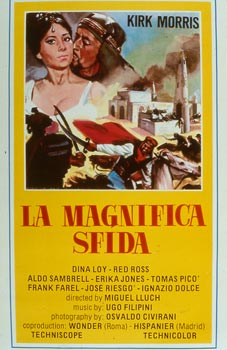 Having killed Nias and usurped his throne, the ambitious Atatur begins his reign of terror in Semares and starts to bring the neighbouring state under his control. His plans, however, are to be foiled by Nias' son, Kadir, who has set his heart on regaining the throne of his dead father. In order to fight against Atatur's fearsome men, Kadir needs support which he finds in the person of king Kevern whose daughter he had previously saved from a Bedouin attack. But, not content with just one ally, he subsequently gains the bedouin leader Hussein as a friend, who also proves that the Bedouin attackers weren't his men but Atatur's men in disguise. With the help of King Kevern and Hussein Kadir drives the people of Semares to revolt and succeeds in defeating Atatur and his mercenary fighters. By regaining the throne he is able to liberate the people of Semares from the tyranny of Atatur.