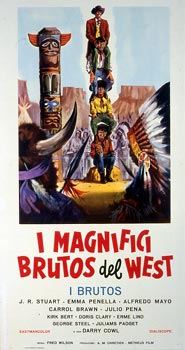 The Brutos, four brothers who live in the Far West, inherit a funeral parlour. Their first client wants them to transport his relative's body to another place. The brothers accept, not knowing that in the coffin there is no body but a hidden treasure. During the journey the four are attacked and captured by Indians, whose chief intends to have them marry his four ugly daughters. After various adventures, the Brutos manage to get their hands on the hidden treasure and return in glory to their country, but they are not so lucky in escaping their four Indian wives.