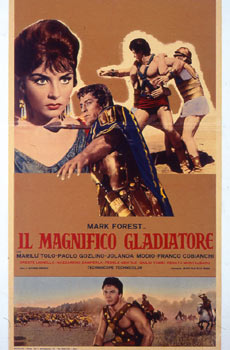 During a violent fight, Hercules, the son of the king of Dacia, is made prisoner by the Romans. Emperor Gallienus, who is stunned by Hercules' physical strength, grants him mercy and appoints him instructor of the gladiators. Beautiful Velida, the daughter of Gallienus, does not hide her sympathy towards the foreigner thus arousing the jealousy of Juddus, the head of the Pretorian guards who is forced to leave for the front. However, he returns to Rome sooner than he's expected bringing a certain Astolfus with him, who is a perfect double of the emperor. Gallienus is soon replaced by Astolfus and Hercules is accused of high treason by the fake emperor. But with Velida's help he's able to flee. Caught by Zuddus, Hercules is taken to Rome again. Zuddus marries Velida, but Hercules is freed by a shrewd shepherd and goes to the imperial palace with his loyal friends, where they kill Zuddus and restore Gallienus on the throne