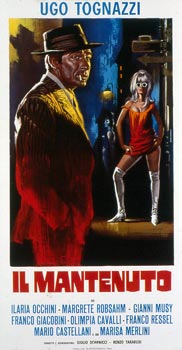 Daniela works as a prostitute. She, unlike her fellow workers, is without a "protector", that is a man who exploits her and lives on part of her earnings. One evening, in order to defend her "beat", she tells her competitors that a man by the name of Stefano is her protector. He happens to be strolling in the park with his dog and knows nothing about the girl's activity. She asks him to be so kind as to defend her from strange men in the street while she is on her way to the clinic where she works as a nurse. He accepts and asks her to meet again. Stefano soon finds himself in difficulties; he is roughly beaten by the "protectors" of the other women and the police put an eye on him. Soon the police superintendent goes to Stefano's office, convinced he has found the callgirls' headquarters. A misunderstanding: he loses his job and goes to work for a rich widow, but there is no end to his troubles. Everyone now refers to him as the "kept man".