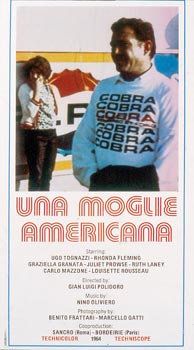 Riccardo, a discontented employee, decides to go on a business trip to New York to change his lifestyle. In fact he intends to marry an American so that he can settle down in the U.S., following the example of an ambitious friend of his who has become very wealthy there. So Riccardo's search for the lady begins. A string of discoverting females stand at his side, ranging from the reckless wife of a missile engineer to the many-time divorced millionaire or the uninhibited nymphette who deals in drugs, to the amoral Italo-American air-hostess. Lastly, he meets a young divorcee who seems to be the one to marry, but he praises her so that her ex-husband realizes he is still in love with her and the two return together. Time is running short and Riccardo, tired after so many disillusions, attempts to marry a girl of easy virtue, but she has other plans in mind... Eventually, he returns, defeated, to his grey life in Italy.