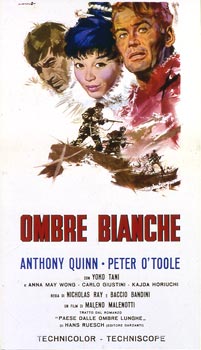 Inuk is a primitive eskimo who lives in a desert region close to the North Pole. According to the traditional way of life of his race, he lives on hunting and fishing. At a certain point in his life he decides to marry Asiak. Their life is full of efforts and difficulties. One day Inuk wants to exchange 100 fox skins for a gun. Through his friend he meets a missionary who tells Inuk that the habit of offering his wife to others is sinful for white people. But Inuk doesn't understand what these words mean and offers his wife to the missionary. The missionary's refusal is a great affront for Inuk and, because of this, he kills him. Two policemen search for Inuk because they want to arrest him for murder. Even if he doesn't understand the white people's law, he accepts following them after having tried to resist them in vain. During a snow-storm one of the policemen dies frozen and the other is about to die in the same way, but Inuk saves him. Grateful the man lets Inuk return to his wife and his child. He will later tell the white people that Inuk has died