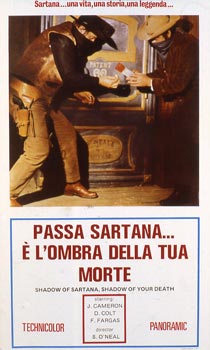 Sartana, an outlaw whose head has a prize of 12,000 dollars on it, is hired by a group of sheriffs, who entrust him with destroying a band of criminals who spread terror in the towns and countryside of North America. Risking his life, Sartana succeeds in wiping out the criminals, bringing peace to the unlucky victims of their violence. Once his mission is achieved, Sartana goes to the Inspector of the District, who gives him the 12,000 dollars that correspond to his own ransom. Sartana wraps the money in the poster that claimed his capture and gives it back to the Inspector. With this move he intends to pay his debt to justice. Riding his horse, he leaves town into the sunset, for new adventures