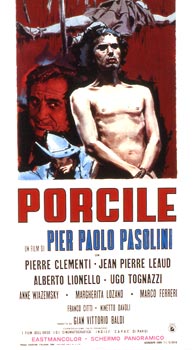 There are two parallel stories, one archaic, the other modern. In the first, a young man lives a lonely existence by a volcano. He devours reptiles, twigs and insects. One day he meets a soldier, kills him and eats him. Suddenly others join him and they form a savage group of cannibals, raping, tearing to shreds and eating a crowd of girls. But society soon sends a troop of soldiers to capture them and later they are condemned to death. In the second story, the young son of a rich German industrialist turns down his fiancée's amorous offers because he is involved in perverse sexual acts with pigs. He also refuses to take an interest in his father's industry. His father, meanwhile, is trying to get rid of a competitor who he has discovered was involved in Nazi criminality by bribing him, but this man in turn threatens to reveal his opponent's son's abnormal tendencies. Suddenly, the youth is savagely devoured by the swine, while the two industrialists drink to their business agreement