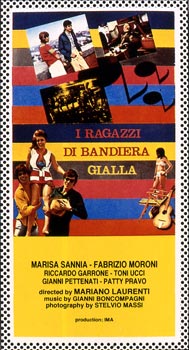 A couple of students, Carlo and Stefano, who play in the same band both rent two different basements situated in the same street in order to transform them into clubs. They are rivals in love for Marisa, their companion and leading singer. The two different clubs definitely split up and separate the group of young people. In the meantime, Marisa has made a disc which arouses interest, especially in the manager of a record company. Stefano, on the other hand, does not succeed in breaking through and Carlo finds difficulties due to his military service. But Stefano manages to substitute his disc with Marisa's during a transmission, obtaining a great success. Triumphantly, he opens his club but Carlo succeeds in sabotaging the opening party. At this point, the two boys on suggestion of Marisa are finally convinced that it's better to combine forces and open up a new club together calling it "The Bandiera Gialla"