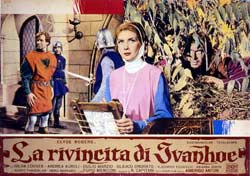 In the intrigued plot for power at the Hastings castle, Ivanhoe is fighting to free the people from a ruthless dictatorship. Having freed his fiancee's brother, Artu, our hero earns her hand in a duel against Bertrand... but this would ruin the Hastings' plans for power! After several dangerous kidnappings and misadventures, just before King Richard's arrival to England, Ivanhoe and his Saxon supporters have the best over their internal enemies... Now the wedding can finally be celebrated!