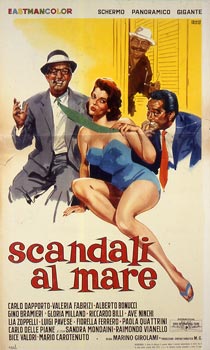 In this film we are shown a number of typical characters of a fashionable sea resort through the eyes of the impassible porter of a big hotel: an incurable play-boy, a dishonest accountant in the company of his mistress, a gangster expelled from the U.S., an aristocratic lady who refuses to become related to a rich butcher, an American couple pestered by their terrible brat, a house-maid mistaken for her rich and spend-thrift mistress. Each character has his own story, his own problems and fate wants all these different stories to intertwine and mix one another, giving way to misunderstandings and revealing little unconfessed secrets. The playboy turns out to be a poor lover, the accountant goes bankrupt, the gangster tries to kidnap the terrible pest and discovers to be the true father of the child and the posh lady and the rich butcher finally agree on their children's wedding