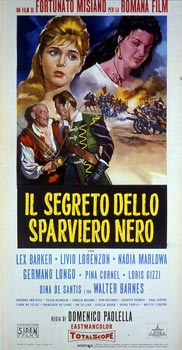 In 1700, both Carlos of Spain and the British Black Falcon are trying to get their hands on some Government documents that the fierce Pirate Calico Jack has in his possession. Carlos and Rodriguez, alias the Falcon, become part of Calico's mob. Not before long a Spanish ship falls into the hands of the Pirate. Aboard is Leonora, Carlos' fiancé. In order to save her, Carlos suggests that Calico ask for a ransom and Calico agrees. So Carlos sends off the ransom letter with a secret message in which he calls the spanish Armada. Calico is betrayed by his accomplice, Chan-Li, and in the brawl the Falcon kills Calico. The spanish Armada arrives, so Chang-Li decides to kill the spanish prisoners. The Falcon and Carlos protect each other and the captives until the Falcon is killed in the melee. The Spanish ship arrives in time to save Leonora (who has managed to hide the important documents) and Carlos