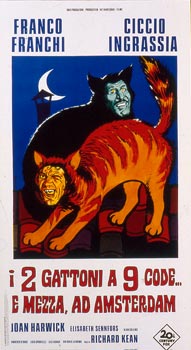 Golden, the great diamond magnate, is assassinated. The only evidence is a photograph taken by a pair of journalists, Franco and Ciccio. These two subsequently receive a mysterious invitation to Amsterdam where they are to make contact with an indian Guru and David. On the plane they meet Bing Bong, who gives them a hint on David's whereabouts but this advice proves useless. Franco and Ciccio's attention is then somehow attracted by the Alpha Hotel where, every time they make enquiries, they are treated as trouble-makers. However, their perseverance is rewarded when they finally catch a glimpse of the Indian. Franco immediately snaps a photo and for the second time is a photographic witness to a murder! They manage to escape realizing that their photo was instrumental in the breaking up of a band of Sem smugglers. Eventually, Bing Bong intervenes, admitting that he is in fact an Interpol agent and has been using Franco and Ciccio as a cover for his own activities.