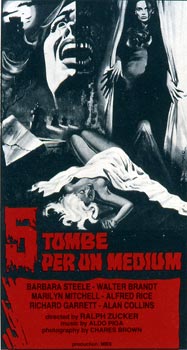 A young notary, Kovaks, is invited by Dr. Jerome Hauff to his remote country home to notarize his last will and testament. Upon his arrival, Kovaks discovers that the author of the invitation has been dead for a year. Cleo, Jerome's wife, thinks that Kovaks has been the victim of a cruel and macabre joke, but Corinne, her stepdaughter, attributes the letter to the supernatural powers of her father, who was a student of the occult. A series of strange facts and mysteries seem to substantiate the daughter's belief. Kovaks discovers that his employer, Morgan, Cleo's former lover, together with some friends, killed Jerome a year earlier. On Morgan's arrival at the country house, monstrous forces, acting through the medium of Jerome, kill Morgan and Cleo. Escaping the terrible danger, Kovaks and Corinne leave the horrible house forever.