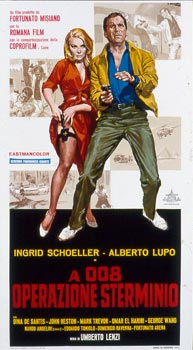 The British secret service sends agent 606 to Cairo where he is to work with an American colleague to search for a mysterious invention, the antiradar. Upon arriving at his destination, the agent makes contact with his colleague, A/008, a beautiful girl, and together they dodge the many murderous attempts of a gang headed by a certain Mr. Kemp. After having found and destroyed the antiradar, the two agents go on to Switzerland to find the scientist who invented the machine and who still has the drawings. But in Zermatt they are preceded by Kemp who they are at last able to defeat. At this point, with the plans safely in hand, Agent 606 reveals his identity. He is a Russian agent who killed and took the place of the Englishman. But the stunning blonde, A 008, has already smelt the rat and is ready to immobilize her false colleague and pack him off to Siberia!!