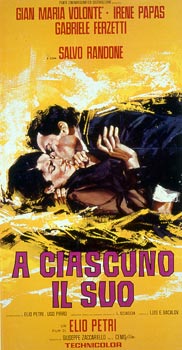 In a Sicilian village two men, Manno and Roscio, are found dead: the police believe that Manno has been killed because of a matter of honour and Roscio because he was present at the murder. Paolo, a school teacher, has a different theory. He believes that it was Roscio, and not Manno, who was the real target. Paolo confides as much to Roscio's widow, Luisa, and her cousin, the lawyer Rosello. With Luisa's help he discovers a diary belonging to Roscio in which is written that Roscio wanted to sue Rosello for certain illegal activities. Upon reading this, Paolo realizes that he has confessed his discoveries to the murderer himself, but he does not suspect that Luisa, who is in love with Rosello, is also in on the murder. Paolo decides to go to the police, but Luisa betrays him leaving him to be murdered by expert killers. Safe at least, Rosello and Luisa get married and there is great feasting in the village.