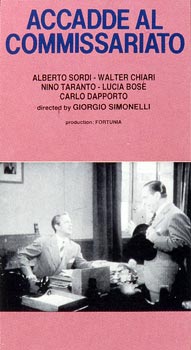 A series of amusing and colourful sketches carried out by some of Italy's best comic actors. What happens in a Roman Police Station in the space of 24 hours? Once in the office, we see the chief of police absorbed in the endless problems that seem to arise there. First comes the problem of a magazine company which has gone bankrupt because its manager has runyaway. The chief manages to persuade the man to return to his duties by means of a cunning trick. Then come a young married couple who are repeatedly unfaithful to each other, and here the chief with a solemn sermon puts an end to all their problems. Soon a small baby is abandoned at the station, and as the chief and his wife have no children he thinks of adopting it; while he's lost in thought, a little boy is brought in. He has been arrested for stealing a toy with which he will amuse the baby. The chief becomes soft and decides to forgive the little boy, when in comes the baby's real mother!