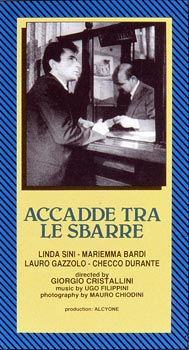 One day, Mimì tells his story to his prison mates: he had been a man of modest means when his mother fell seriously ill. He had asked his employer for a substantia loan to pay for the costly treatment necessary, but his request had been refused and his mother died. By way of revenge, Mimì and his uncle had stolen cheques from the employer and, having cashed them, had been forced to flee abroad where Mimì had pursued similar criminal activities until one day, overcome by homesickness, he had decided to return home where, on arrival, he had been promptly arrested and thrown into prison. However, he now has heard of a half-blind man willing to sell his only remaining eye in order to raise the money for a operation which will restore his small daughter's speech. The convict gets his fellow prisoners to raise the necessary sum for the operation and soon they all have the satisfaction of hearing the child speak. A warm ray of happiness that penetrates concrete prison walls.