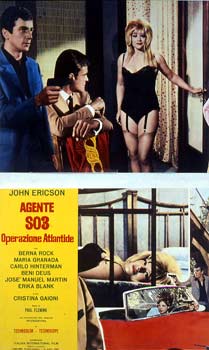 Agent S03 is hired by an international organization for research on uranium to investigate about sabotages to one of their centres in Africa. Infiltrated among the terrorists, he discovers their real aim... The conquest of the city of Atlantis, where the Chinese have just installed a nuclear plant! After destroying the plant with the aid of a charming Russian agent, S03 finds out that the head of the terrorists is a high positioned man..