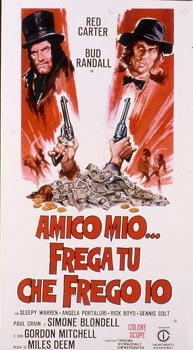 Jonathan Dickinson and his enemy-friend Mark Tahor live by cheating and squandering their money in saloons. One day, a crazy old man named Denver tells Jonathan and Mark that gold has been discovered on the Rocky Mountains. The whole town moves to the mountains with dreams of becoming rich and those who do are bitterly disappointed when on their way home they are robbed by Mulieta and his vicious gang of outlaws! Jonathan and Mark suffer the same fate as their fellow townsmen, but their sudden poverty after such wealth spurs them into action and they decide to fight Mulieta's gang and retrive their gold. After a nailbiting struggle, Mark and Jonathan win, Mulieta and his gang are destroyed, and the two friends are hailed as heroes by the whole population.