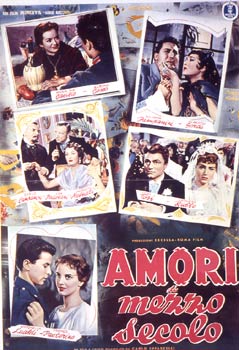 The film consists of five episodes: 1) Elena, born of a noble family, loves Mario, a pianist, but her father wants her to marry a rich aristocrat. Through deceit, her aunt manages to make the girl consent to the marriage organized by the family. 2) In the years before World War I, a doctor favours liaisons and adulterous affairs between his patients of both sexes, until he finds out that his wife is cheating on him as well, and this puts an end to his despicable activity. 3) During World War I, Carmela and Antonio get married and soon later she is pregnant. But then Caporetto comes: Antonio has to go to the front and dies the same day his child is born. 4) In October of 1922, Alberto, a strong supporter of fascism, leaves his hometown and his fiancée, Susanna, to move to Rome. There his political enthusiasm fades away in night clubs and easy adventures. But Susanna, too, has come to Rome and manages first to make him jealous and then to make him return to his hometown. 5) The tragic love story between the pilot Renato and the chorus singer Carla, set in 1943 amidst the bombardments of Naples