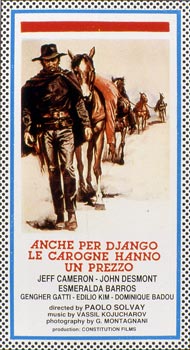 The Cortez brothers rob a bank and flee beyond the mexican border. On their trail are various people, each for a different reason: Sheriff Fulton is sent by the robbed bank to recuperate the money; Django, a head-hunter, is after them for the reward money; Pickwick is after a precious saddle stolen from him by the Cortez brothers; Pedro and Dolores, saloon owners, also would like to have the loot. After various situations they manage to have the brothers captured and can each proceed on his way. Django frees Susan from the tyranny of the Cortez's and refuses the reward money, contented with her love.