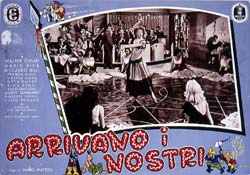 Lisetta is in love with Walter, but her father is so much indebted to a rich man called Garlandi that he is forced to accept his daughter's marriage to Garlandi... Walter discovers that Garlandi has a lover and decides to save Lisetta from a useless sacrifice: helped by three cabaretists, after a series of tragi-comical adventures Walter recuperates a precious jewel belonging to her father, enough to cover the debts... But it is almost too late, Lisetta is about to get married....