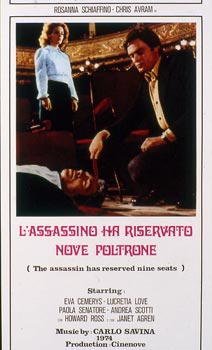 For the night of his birthday, Patrick Davenant a wealthy Englishman, invites some friends to visit the old theatre situated in his family palace, which has been closed for a hundred years, ever since part of the family remained trapped in the castle and died. The victims of the tragic birthday-party night are: Rebecca, Patrick's sister, Doris, Lynn, Patrick's daughter, with her boyfriend Duncan, Kim, an actress engaged to Patrick with her lover, Russel. As soon as the party goes into the house, all the doors close behind them and, at this point, a clain of crimes begin. Only Viviana will find her way out...!!!