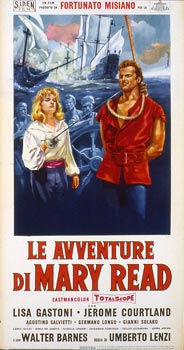 Mary Read is an adventuress of the 17th century and extremely skilled in disguising as a man, so much so that, passing as a handsome gentleman, she is able to rob elderly rich women of their jewels. But before she realizes it, the police nab her and lock her up in prison with a handsome young man. Mary, clever as she is, fails to fool the young prisoner who loses little time in making love to her. Later, when she escapes, she learns that her prison mate was no ordinary thief, but Peter Godwin, son of a Lord. Mary is angry that he did not reveal himself to her and later, when she becomes the captain of a pirate ship using the name of Captain Poof, she pits her seamanship against Peter, who is commanding a british man-of-war bent on destroying her and her vessel. But she makes a fool of him until in a duel he defeats her. A year later we find her in England the lady of Lord Godwin's manor. A most enjoyable film full of fun and action.