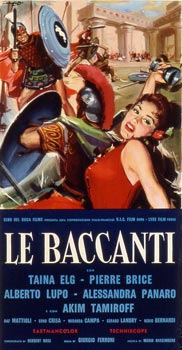 According to Tiresias, the drought afflicting Thebes is caused by King Pentaeus' failure to sacrifice to the God Bacchus. Thus the King decides to make a human sacrifice and chooses Mantos, Tiresias' daughter. Pentaeus has usurped the true King Lakdamos' throne who lives as a slave, unaware of his royal descent. He is in love with Mantos and to save her life seeks the help of Dirces, wife of Pentaeus. Upon the advice of Tiresias, the girl leads a group of maidens to the mount Cytherona to ask the God for clemency. The God appears and promises to save Mantos. Meanwhile, Lakdamos has learnt of his royal birth, and flees to mount Cytherona with his tribe. Dirces has fallen in love with the God and becomes his priestess. Pentaeus leads his army against Lakdamos, but the army is routed by the Bacchantes, while the tyrant is killed by Lakdamos. Bacchus thus goes back to Mount Olympus after appointing Dirces Chief Priestess.