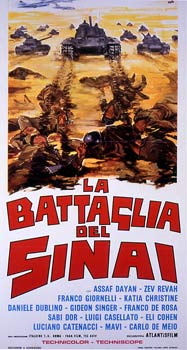 Eight young and brave Israelians in war with the R.A.U. lead a column of tanks in an exploratory mission. After a dangerous conflict with the Egyptians, one of whom destroys their helicopter, the eight soldiers occupy an enemy missile base. A counterattack puts the life of our heroes in serious danger but although inferior in number, they fight back bravely. Exhausted, they are about to give in when... the radio announces the end of the war.