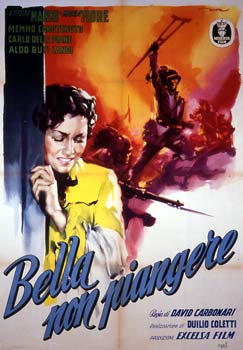 Enrico is a good but restless young man who that, in spite of his girl's efforts, is not able to keep a job! Due to an on-the-job injury he looses a leg... and for Nina's good, decides to leave her. After several efforts he is accepted in the army, and during the war meets Nina's husband - a cruel and violent man... During an attack the latter dies and Enrico, wounded, resists bravely: ran out of bullets, but strongly determined, he uses the only weapon he has... his crutch! Mortally wounded, he dies happily for having won his "personal battle"...