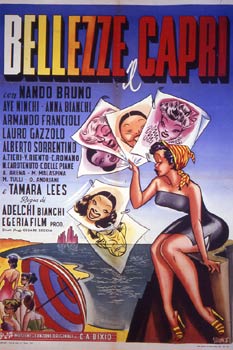 There is an old rivalry between Don Violante, the parish priest of Anacapri, with his old-fashioned ideas, and Don Camillo in Capri, who's much more open-minded. When Gennaro, a young organist hired by Don Camillo, falls in love with Clelia, Don Violante's niece, things get worse. Clelia and her mother, Don Violante's sister, come to Capri to spend their holiday and stay at the parish. Gennaro would like to officially propose to Clelia, but Don Violante doesn't agree. One night, Clelia and her mother go to a fashionable club in Capri where an orchestra is playing (directed by Gennaro). When Don Violante is informed of this, he immediately goes to the place and wants to stir up a scandal: but he can only witness Clelia's election as Miss Capri. The following day Gennaro wins an important prize and he thus has the means to marry Clelia. There is still one question to be solved: Where shall the wedding be celebrated?