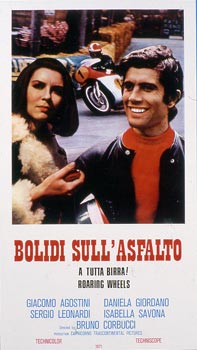 Mino, a young mechanic, is persuaded by a friend to "borrow" a client's cycle and take part in a junior race. He rides brilliantly, but gets in an accident and wrecks the bike. To their surprise, the furious owner is a young lady named Jo. With Paolo's help Mino enters a motor-cross race. He rides daringly but is constantly obstructed by another rider who turns out to be Jo. The resentment between the two soon disappears and Jo becomes his admirer and supporter. Mino is engaged by a bike manufacturer to run in the world championship race. Mino rides a breathtaking race in the rain and fog. He wins the race and Jo's love.