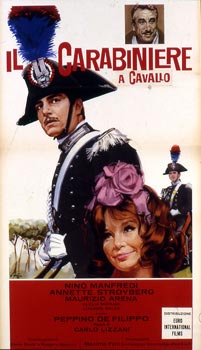 Francesco, one of the best cavalry men in the Carabinieri, is being transferred so he decides to marry Letizia secretly instead of waiting another four years as the regulations state. The day before the wedding Francesco ends a quarrel between two gypsies, but in the meantime his horse has disappeared. Instead of reporting the theft, he goes looking for it himself. He goes to the racetrack, to the slaughter-house, to a blacksmith. Francesco goes to Bolsena where the gypsy tribes have all gathered for a ceremony. He manages to convince the members of the local band to march along the streets playing the Carabinieri's March. Sure enough the horse shows up. He promises his 'secret' wife he'll get an anti-theft device for the horse.