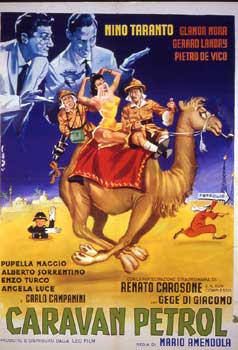 Ciro Cerquetti is a poor Neapolitan barber, harassed by his whole family. One day, however, he receives unexpected and marvellous news: his grandfather has died in Irat leaving him his sole heir. Ciro immediately leaves for Irat, but there is a revolution going on there, and Ciro and his travelling companion are arrested. After they've escaped from jail, he meets various mischievous fellows who want to defraud him of his property. Ciro takes advantage of the confusion caused by the revolution and he finally reaches the place he has inherited: but there is nothing else than desert to be seen. Ciro has an idea: in the ground he hides a barrel of oil and then pretends to drill, making the oil spring forth. So Ciro manages to have Hatworm buy the estate for 2 million dollars. Meanwhile, the three women of the family have arrived in Irat and peace among them is restored once again. But there is yet another problem: the political situation in Irat has changed and all Neapolitans are imprisoned. The Cerquetti family is forced to flee once again and returns to Naples where they will stay once and for all