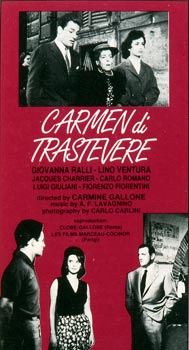 A human triangle, the points of which are bloodied by infidelity, double-dealing and jealousy. A beautiful young woman, the wife of a cold, calculating criminal, falls in love with a young impressionable police officer, who sincerely reciprocates her feelings. His need for her is strong enough to make him desert the police force and enter the shady world of her husband, who has just been released from prison. The husband is philosophical about the young man's feelings for his wife; he simply incorporates the former police officer in his criminal activities. Basically, the criminal's wife, Carmen, is cut of the same cloth as her husband and acts as bait and decoy in the swindling of an American who turns the tables and shoots the husband dead. The young wife plays around with another young man and so the police officer, thoroughly disappointed with her and with his own dishonest activities, faces her in a jealous rage and shoots her.