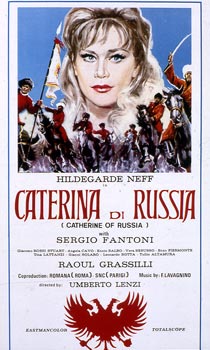 In Peterburg, a crowd forces the royal carriage, carrying the Tzar Peter and his wife, Catherine, to a stop. The Captain of the Cossacks, Orlov, is ordered to fire into the crowd, but refuses and is sent to Siberia for his disobedience. Meanwhile at court, the frivolous life continues, characterized by Peter's crazy acts. Catherine tires of her husband's behaviour and seeks affection in love affairs but is not too discreet in her choice of men, who inevitably turn out to be insincere, as is Count Poniatowsky, a French spy. Orlov escapes from Siberia and returns to Peterburg to find Peter has ordered the Cossacks to put on German uniforms. Orlov tries to rally the troops but is arrested again. However, Catherine discovers that Peter wants to have her eliminated, so she frees Orlov and, with him, joins the Cossack troops. The Cossacks declare Peter deposed from the throne and proclaim Catherine Tzar of Russia.